The 1930 Franklin Model 145 Club Sedan was manufactured in Syracuse, New York. All Franklins built since the first one rolled out in from 1902 until the company went our of business in 1934, were equipped with Franklin’s signature air-cooled engines.

In 1930 the straight-6 engines underwent a major redesign that allowed a significant increase in horsepower, so the 1930 Franklin Model 145 Club Sedan is no slacker on the road.

You can find more striking cars of the ’30s on this page. 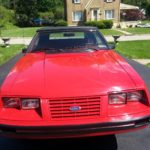 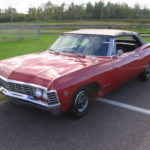